Is Hiding Veggies in Food a Good Idea?

You see it everywhere. How to get your kids to eat vegetables! It’s simple! Simply hide the veggies in there so that they don’t know. They’ll never be any wiser! Or maybe you see recipes that encourage you just to add vegetables to a recipe to get them into your kids, perhaps just puree them up and add them in since they won't eat them otherwise?

But is this actually a good idea? Does it help our kids?

Should You Hide Veggies in Food?

Hiding vegetables in your child’s food is something that I recommend against in pretty much any situation.

Hiding veggies in your child’s food will lead to an erosion of their trust for you, can damage their relationship with food as well as with you, will not help them learn to like vegetables, and will likely only get a few extra bites worth of vitamins and minerals in them.

Basically, it’s just not worth it!

Now for the details behind all of my concerns. I want you to think of a food that you just really cannot stand. Something that just the thought of it grosses you out, or makes you sick. Or maybe even just something that you do not care for and choose not to eat.

Now imagine that you have gone to a dinner party and the host has asked if you have any preferences.

You’ve shared that you don’t eat this specific food. So you have the dinner, and you’re grateful that the host has made a meal you can eat, without this food in it.

At the end of the dinner, though, your host informs you that in an effort to broaden your horizons and help you learn to like this food, she actually hid it in your meal. And you just ate it all.

How would that make you feel?

There would likely be lots of emotions going through your mind after learning what had happened.

From anger to feeling violated, you would certainly not look at any other food that person served you in the same way again.

Would you want to eat their food? Would you believe that they had your best interests in mind? NOPE.

Put Yourself in Your Child's Shoes

And that is exactly how it is for kids.

Yes, they are learning to like foods, and their tastes are changing all the time. But in that moment, they do not like a certain food. Perhaps the thought of eating it is way beyond what they can tolerate.

By hiding the food in their meal, you are inviting a lot of distrust of the food you serve your child going forward.

In an effort to get them to eat more, you’ve likely encouraged them to eat less. Because now they don’t trust what you are serving them.

Veggies Are Not The Be All and End All Of Foods!

Usually, when we hear about hiding foods in our kids' meals, it is a vegetable.

Our culture tends to emphasize the eating of vegetables for kids, just as much as it might demonize sugar. We’re made to feel like a bad parent if our kids don’t eat their vegetables at mealtimes. It will keep them healthy after all, right??

Here’s the thing. Fruits, which tend to be accepted much easier by kids, are just as healthy! They have just as many vitamins and minerals, and just as many positive benefits.

And no, you don’t need to worry about there being too much sugar in fruits. The sugar is naturally occurring in it, and is very different from added sugars in other foods.

Fruits tend to be much easier for kids to learn to like. They’re sweet. And delicious. Most adults don’t eat enough fruit (ref), and yet we tend to discourage kids from eating it in favor of vegetables.

So instead of hiding vegetables in your child’s meal, serve them a fruit next to it.

And add a visible veggie while you’re at it. Having pressure-free exposure to a food is actually one of the best ways to help a child learn to like a food.

Get help with stress-free meal times, broadening your child's food horizons, helping them develop a positive relationship with food, and so much more!

Our Goal Is for Kids to Learn to Like Vegetables, Not Simply to Get the Nutrients in Them

Let me put this into perspective for you. So now you have pureed up some carrots or whatever other vegetable was in the recipe. They’re in the meal.

You went to all this effort, your child might take a few bites, and not even know they’re there.

So they’ve gotten maybe a little bit of some vitamins and minerals. Definitely not enough to meet their daily needs. And there was no exposure to the actual veggie.

Maybe that seems like a good thing. No battles, right?

But by not being exposed to the vegetable, they aren’t given the chance to learn to like it.

Because new foods take time to learn to like for kids. It’s almost never a one and done thing with food, unless it’s something like chicken nuggets or mac and cheese.

Not Eating It Is Better Than Hiding It

From my professional perspective, putting the vegetable on a plate on the table, and taking some on your own plate and eating it, would do your child infinitely more good than them actually eating the vegetable that was hidden in their food.

Seeing the food and not even putting it on their plate or touching it will help them in the long run more than having the food hidden in their meal.

Because what happens if you get their veggies in them by serving them hidden?

Your child grows up eating veggies that way and not actually being exposed to them as a food. They leave your house and are on their own for food.

They’ve never learned to eat, or even like, vegetables because you’ve always hidden them. So therefore, they don’t eat vegetables.

I don’t know a parent around that that is the goal for their child. As parents, we want our kids to succeed! In life and on their own.

And when it comes to feeding, sometimes that means looking at our long term goals instead of the short term satisfaction. Does That Mean You Shouldn’t Put Vegetables in Foods?

There is a big difference between adding a vegetable to a food, and hiding said vegetable. What’s the difference? Being upfront and honest about it with your child!

Obviously your baby doesn’t know what you are putting in food, but your toddler sure does.

Starting as soon as they know some foods and have preferences, it is important to be open with your child about what you are serving them.

That means, by all means add carrots to your spaghetti sauce. Add in zucchini, mushrooms, all the veggies you want. But then tell them that you are having spaghetti sauce with carrots, zucchini, and mushrooms.

Don’t just say you’re having spaghetti sauce and purposefully hide the fact that there are veggies in it.

I am the queen of bulking things up with veggies. I do it with most meals. But the key, again, is being open with that.

My kids likely think that all spaghetti sauces come with vegetables, but they can also tell you every ingredient that we put in the sauce. They might pick that veggie out of their food, but the exposure they get from it being on the table and a normal part of a meal is much more important than them actually ingesting that vegetable. 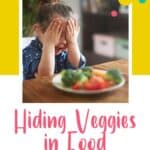 Feeding is about so much more than just nutrition! Get help with small group coaching to work on those toddler behaviors that tend to pop up, before they turn into something a lot more disruptive! Focusing on it now, before it get's worse or turns into a big issue is the best way to handle it! 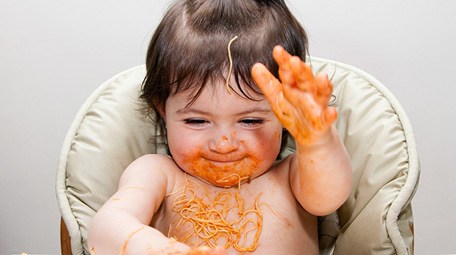