Is Salt in Baby Food Okay?

Have you heard the advice to limit salt for babies? Especially for those under one? Salt is one of the big worries I hear about from parents. Worrying about it can lead to a lot of anxiety as you feed your baby, so let’s talk about what you really need to know. How Much Sodium Can Babies Have?

The general recommendation from health professionals and organizations is that babies under a year can have less than 400mg a day of sodium, or 1g of salt. That is less than 1/4 of a teaspoon! Technically, it includes the amount they get from breast milk or formula AND solid foods, as well.

That is not a lot! And can seem really hard to stick to.

A Practical Approach to Salt for Babies

For the last several years I have talked about how much salt we should give our babies. This is generally focused on how to spot processed foods like breads, cheeses, and other common staples that have a decent amount of sodium in them.

It’s important for us as parents to pay attention to these processed foods and take note of what we’re giving our babies.

But these recommendations to pay attention to processed foods and foods you buy pre-made have gotten lost in the noise. And instead of focusing on processed foods, all sources of sodium have come under heavy scrutiny.

It has gotten to the point where many parents are under the impression they shouldn’t give any sodium to their babies. Or that they need to be afraid of giving it. And that is simply not the case.

Can Babies Have Salt in Their Foods?

Yes! Babies can have salt. What we don’t want is to go overboard on the amount of sodium that your baby is getting.

Traditionally we have argued that this is because their kidneys are immature and can’t handle too much salt.  Or that we don’t want them to get too used to the taste of salt and become preoccupied with salty foods as they grow.

But the fact of the matter is, we really don’t have much quality evidence to establish true limits to the amount of sodium a baby should have.

We have guesses, and general assumptions.

We have some evidence around kidney function prior to 4 months and also a year. But the evidence is by no means conclusive that 400mg is the absolute limit of sodium per day that a baby should have. Or that if your baby goes over that amount there will be harm. If you’d like a detailed dive into the research behind sodium, check out this article by a fellow dietitian.

So where does that leave us? It leaves us with an educated guess that we really don’t want to be overdoing the sodium for babies and giving them a ton of processed foods daily.

We might not have conclusive evidence that there is a specific number to stick to, but we do have enough evidence to say that we should be mindful of the sodium that they’re getting.

When to Give Salt to Babies

So we know that we don’t want to go overboard, but what exactly does that mean? How can you apply that?

First and foremost, I want to repeat that while we want to be mindful, there is no evidence that harm will occur if your baby gets more than the recommended amount of salt. The evidence for salt intake is inconclusive!

Hopefully that puts a little bit of any anxiety you may be feeling at ease.

When it comes to salt, my general recommendation is to stick to one food and/or meal that is on the saltier side each day for your baby.

Does that mean that you have to completely refrain from giving any salt the rest of the day if they have that meal? No! But I would recommend aiming not to have multiple salty meals like that in a day.

It’s all about balance here. It’s not about numbers or counting them up obsessively to make sure your baby doesn’t get too much sodium.

If you’re giving your baby foods that have a nutrition label on them, make note of how much sodium is in the amount of food your baby is likely to eat. And use that knowledge to determine if it was a really salty meal or not.

If it wasn’t, then just go about the rest of your meals for the day. When you do serve a really salty meal, do your best to adjust your other meals to contain things that are less salty.

If you can start to train yourself to simply make mental notes like that, your baby will be in a great place because you are aware of sodium in general.

Should You Put Salt in Your Baby’s Food

We’ve gotten processed foods out of the way, which for this purpose really means anything you would find a nutrition label on in the store. But what about home cooking? Can you add salt to your baby’s food?

Salt in the main dish when you are cooking for the whole family is fine. I generally recommend, again, not going overboard with it.

But just like my recommendations for saltier processed foods, if you do find yourself cooking a dish that really needs some salt to taste good, then add it! We want our babies to have flavorful foods! If you don’t find that a dish needs salt, then don’t add it.

For those times when you do add a decent amount of salt to a dish, simply count it as the salty meal for the day. To help you out here, 400mg of salt is a bit less than 1/4 tsp.

If you aren’t adding salt during cooking, I don’t advise adding salt to your baby’s food after the fact. They don’t need the salt.

How to Handle Salt in Restaurant Food

Restaurant food tends to be much saltier than home cooked food. Not to mention there’s no real way to know how much sodium is in a restaurant meal. But if you can’t tell already, that does not mean that your baby can’t eat at a restaurant!

Do your best to follow the guidelines for sticking to one salty meal a day. So if you know that you’ll be eating out for dinner, aim not to serve other really salty meals earlier in the day. Again, this is all fluid and not set in stone. Being mindful and aware is half the battle here!

You can aim to find things that might be less salty at a restaurant, but I prefer to look at it another way.

Use restaurants as an opportunity to expose your baby to foods that you might not cook at home. Or that might simply taste different than how you cook it.

One of the best things we can do for our babies and kids is to expose them to variety in their foods. Eating in restaurants is a great way to do that!

So instead of focusing on how much sodium is in something, focus on what new flavor you can introduce them to. Forget the sodium amounts. Go for the experience!

How Often Should Babies Eat in Restaurants?

If we look at restaurant meals as our salty meal of the day, from a purely salt standpoint eating at one restaurant a day we can guess is unlikely to cause any issues. Remember, there’s no conclusive evidence one way or the other here!

But what happens if you’re on vacation and eating out at every meal? Or are eating out frequently for whatever reason?

If it gets to be a frequent occurrence, I would start to be more mindful of the likely sodium amounts in the dishes you choose. Picking things like soups that are broth based means there will likely be a lot of sodium in them. Go based on what you have found to be salty in your own kitchen and purchases to help you determine what might have more salt in it.

Focus on things that are simple from the menu to try to keep the salt down. You can even ask the restaurant staff if they can go easy on the salt for you. But there is no need to do this if you are just eating out occasionally. This would be something I would start to consider after several days of eating out consistently.

What Happens With Sodium When Your Baby Turns One

If we are operating under the one salty meal per day guideline, then I recommend continuing as is and not changing anything once your baby turns one. Continue to be mindful but allow them to experience salty foods as the rest of your family does, within reason. As they continue to get older and establish reliable eating patterns, just continue to be mindful of how salty things are. But know that this is more for establishing good eating habits and less about anything related to kidneys or other theoretical medical concerns. At one, there is reason to believe that their kidneys function the same as those of an adult.

If you want to more strictly follow the normal guidelines, then the recommendation is 800mg a day for toddlers through 2, and a little more as they grow.

I sometimes find it helpful to use this number to gauge how salty the processed foods I’m buying are. It helps you to know if the bar you are giving them that has 400mg of sodium is really salty or not. (In this case, I would consider it a salty item if you are wondering!) And how to handle the rest of the day as we have talked about above.

I don’t recommend using this 800mg number to strictly count milligrams and ensure you are not serving more than that each day. That is a recipe for anxiety and stress, which is exactly what we want to avoid with starting solids and feeding our kids!

So do your best not to stress about it, and just keep it in mind as you plan your baby’s foods. There is no need to restrict it completely! 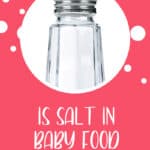 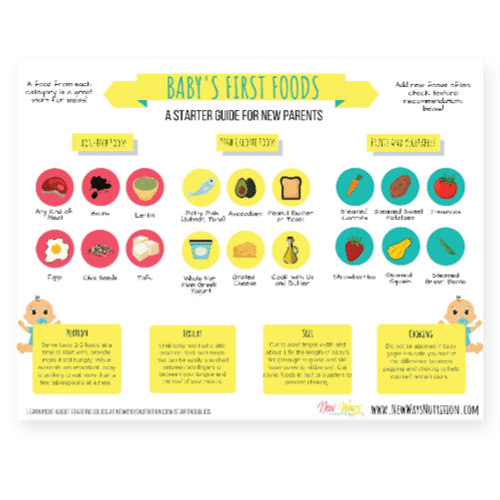